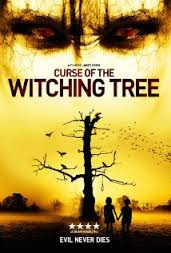 Curse Of The Witching Tree is a small independent British movie, directed by James Crow.
When a family moves into this farmhouse, a house which is well below market value. Who are being warned subconsciously by the locals about strange things going on with the house.
The Mum is trying to keep her family from imploding due to the fact her husband,their Dad is in a coma, to an unknown reason. We have a rebellious teenager daughter who is constantly battling with her Mum. We have a younger teenage brother,already being bullied at his new school. By being told of the awful things that happened at the house,a mass murder of children followed by a suicide in the barn. Also talk of an old curse of an innocent woman, being accused as a witch,and being hung and  quartered and being buried in 9 places.

To fit in and to avoid the bullying Jake agrees to a seance at the barn,to talk to any spirits. With the spirits of the children being raised,and scaring the bullying teenagers. What we have left is a small family struggling to come to terms with their Dad being very ill,whilst being tormented by spirits of children, A cloth faced figure, strange dreams about a tree in the forest.
What we have left is a very creepy ghost story,obviously not in the same vain as the recent Paranormal Activities franchise,but a very slow burner of a chiller, and not a balls out fright fest. We have a director who would rather build up to creepy moment,than give you the deliberate jump scare we get in most modern horror films now,using deliberate jumpy loud music to force a scare.

This is what I did like about this movie,the Director would rather you be unsettled by something, and creating a creepy scare,rather than a forced scare.
The movie isn't without it's flaws though,apart from a great stand out actress Lucy Clarvis, who plays the troubled Emma in the movie,the rest of the acting is average at best, not terrible, still watchable.
I cannot help but think with a bigger budget,and more experienced actors. This could have been a decent little chiller of a movie, but don't let that distract you from what is, still a very good low budget independent film.
It is not without it's faults of cause, and some of the acting is below par. Apart from that small rant, yes I still would recommend this film,it will still chill you rather than terrify you,and the fact you can get it for as little as £3.00 in some supermarkets,please give it a go. If not for the brilliant Lucy Clarvis