A lesson In Time, Darwinism, Evolution all in 90 minutes 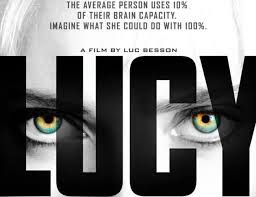 Now I do not pretend to be a clever man,I have always swayed more to the idea of the big bang theory, the Darwin version of Evolution Always connected more with me,than any other idea. I'm not rambling on about  this for no reason at all, as it has everything to do with this film. An actual  clever film,for once that asks serious questions about the reason for our existence. Luc Besson said this film has been 10 plus years in the making so he could do all the scientific research for this movie. And it really is a fantastic film,wrongly marketed as an action film. The average human only utilises 10% of there brain capacity,what if a person could use it's brain to the full potential that is what this film is about.Poor Lucy Get's caught up in a situation in Hong Kong,thanks to her no good boyfriend. He tells her just take this brief case to the desk of this hotel,hand it to the owner and that is it. Turns out the briefcase is full of an experimental drug,to give you a high like no other CPH4 is it genetic name. It gets sewn into her lower abdomen with three other Drug mules to be redistributed around Europe, France, Germany, and  Italy from the Chinese Triads. This drug is like no other for one reason,as it is an actual chemical reaction a woman releases during early stages of pregnancy. To encourage all her cells in her body to actually produce life,and give it the equivalent  of the big bang in your womb,to produce a baby,and to create all the genes and cells to produce life. They have managed to produce this affect in a drug which gives you a hit like no other. 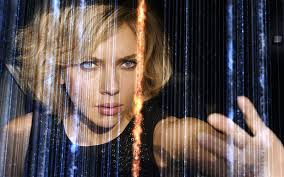 When Lucy gets Roughed up before she gets on a plane,with an attempted molesting from a horny Chinese man,he beats her,then kicks her in the abdomen where the drugs are,which ruptures the bag of drugs,and seeps into her system with amazing effects. A kind of being reborn again but with the instant knowledge,she is smarter,can feel everything,the air,see sounds,see almost through the whole fabric of time and space. In all respects she is A God,And her brain and body is getting smarter as it unlocks more areas of the brain never normally utilises. As I said this is not an action film at all,it is probably the most thought provoking film I have seen in a while, the reason why European Cinema is so much far ahead of Hollywood, A French produced film,obviously with some American finance, that will knock your socks off,and equally confuse you with it's logic and ideas at WHAT IF?
I will put my neck on the block and say it is my favourite film I have seen this year,Scarlette Johansson is Stunningly gorgeous, absolutely brilliant in a role I couldn't keep my eyes off her,and not for those reasons,but she is so good,really really good, Morgan Freeman puts in another flawless performance, and the writing, directing by Luc Besson is incredible, a film that literally  blew me away.
Even The confusing Ending could not distract me from this beauty, a film that with repeated viewings will explain more and more.A modern Classic.