A few days to kill 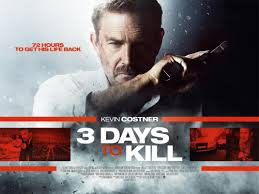 I hope you all don't mind but my next few reviews will be of the action variety, I have loads of films I have brought in the last few months, and this was one of them. A cracking film from 2014 from acclaimed French director Luc Besson . I loved in the 90's La Femme Nikita,which was remade with Brigitte Fonda called the Assassin . The best hitman film ever made period and that is Leon with a brilliant standout performance from a 13 year old Natalie Portman, and apart from Black Swan I have not seen her in anything better. Sorry going off on a tangent then. He then directed the fantastic lavish the 5th Element,which is in my top 5 all time sci-fi movies. He then went off the boil a bit, and took a role as Producer,with his writing talents also created the Transporter trilogy, From Paris with Love,and the recent Taken franchise. 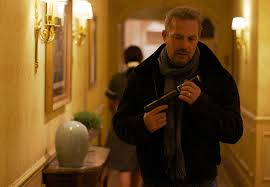 This film I wanted as soon as I saw the trailer it was a Three Days To Kill, starring Kevin Costner and Amber Heard. I loved Costner 90's films and as an actor, and probably at the time the most bankable actor for that decade. He then kind of passed me by in the 2000's without me seeing a single one of his films. I recently saw him as a supporting actor in the 2013 films Shadow Recruit as a father like figure taking a young Jack Ryan under his wing. And the most genius of casting ever is playing Clarke Kent's dad in the recent Man Of Steel superman rebirth. He obviously got noticed again and became leading man material once more in the film Draftday and this little beauty.
Now this is a simple tale Kevin plays an ageing CIA agent called Ethan, on the hunt for this terrorist,he almost catches this terrorist in a fantastic action packed opening,only to collapse,before shooting terrorist in the leg as he is running away. He wakes up in hospital to be told he has terminal illness ,not many months left to live so he is put on immediate retirement to spend the last few months with his estranged family,living in Paris. His wife hates him,and his daughter does not know her father,and he is going to make sure he makes good of his final months and bond his family back together again.This he hopes to reconnect with his family especially his teenage daughter brilliantly played by Hailee Steinfeld, who was brilliant in True Grit and also Ender's Game. Anyway as Ethan is the only man alive who has ever seen this terrorist, but is on retirement Amber Heard character Vivi turns up in Paris to give Ethan a chance at life again with this experimental drug,take the drug in three doses and he has a chance at life,refuse it and he will die. Obviously he takes the chance of life in return he has to get back in the field again as a CIA agent, against his family's wishes,which he has to keep quiet, and he has three days to locate this terrorist who is planning on doing business in the capital. Now for a 12 rating or in the US a PG13 it is a very well made action thriller, with Costner back on form on action man duties again, Luc Besson directs a very tight thriller,which is very funny and equally touching in moments,when Ethan returns to his Bachelor pad it has been taken over by African Squatters,a family with a teenage daughter like himself,who is heavily pregnant.He feels sorry for this family and lets them stay.As I said I can recommend this film absolutely the only downside is and most men will hate me for this and that is Amber Heard cannot act,she is terrible in this film.She must be having a bad time on set,but Iv'e seen her in much better roles,All The Boys Love Mandy Lane,Drive Angry,The Ward in which she was brilliant.But the plus points Costner is on form again. Connie Nielsen Is still stunningly beautiful and Hailee Stienfeld for her young age is a fantastic actress. So as a Franco produced Hollywood action film I can certainly recommend. 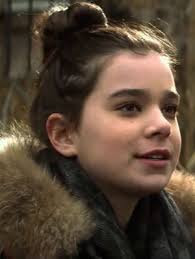