Treehouse a much underrated film

on June 30, 2015
My second review is of the little known film Treehouse, now when I saw this film cover I and I think many others were drawn to this film, expecting maybe some kind of supernatural element, a picture of kids hanging from a tree next to a treehouse with a sign nearby saying no kids allowed.
Yes I was curious so I paid my £3.00 and got home to watch it.
Yes it wasn't what I expected at all, but a very tightly directed thriller. With a survivor element,to strange things in the woods, once again I'm not going to give key plot points,or spoilers, but I was impressed once again. A lot of reviews on various sites do slag off this movie, comparing it to a second rate chainsaw wannabe film, but I think this film deserves more credit than that.

Staring Dana Melanie, and a very good performance from Jonathan Michael Trautmann, and Directed by Michael Bartlett. Please give this film a try, and if two kids go missing,and a local sheriff puts on a late night curfew don't break it and go to the woods in the hope of scoring with girls, you know it isn't going to end well. 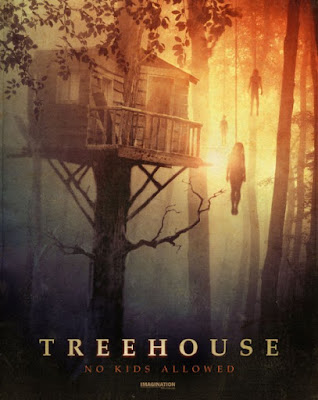