Got these two films the other day

on June 29, 2015
If your a resident in the U.K. like myself the hype around this actor has been unbelievable, Born in Derbyshire East Midlands at the ripe old age of 24 LOL  he has been getting a lot of attention recently. Started off playing a troubled teen in the U.K T.V series called skins.
He even starred in the Director debut of Angelina Jolie's Unbroken 2014 a world war 2 story about survival, resilience, redemption, or so the tag line on film poster says.
The Actor I'm talking about is Jack O'Connell. I saw these films on offer at my local supermarket, or the American equivalent Wallmart at a bargain price and I had to see what all the hype was all about.
One is called Starred Up, a prison drama based in a tough prison, when a troubled teen gets sentenced to not a young offenders institution, but to an adult prison, purely on his behaviour, and constance rule breaking, and violent behaviour. Now in all honesty I have not watched this one yet, but I did sit down to watch '71. So so glad I did, a 90 minute ride of pure adrenalin, a survivor film in no sense of the word.
Now I'm not going to get into politics, but this film is about the troubles in Northern Ireland in the early '70'S. Jack O'Connell plays a young British Army Soldier, who on his first field operation is sent to Northern Ireland, to assist the RUC making arrests in a Catholic Area in Belfast.
All I can say is a riot ensures, and he and a colleague gets left behind in a very fast retreat from the British Forces. The rest of the story is of survival in an alien environment, closed streets,no escape, in a British Forces uniform.
What I did like about this film was it showed no side to be right or wrong, each were as aggressive and also very human too. It showed the goodness in the human kind,and the worst too, and wasn't  on either side judgemental. A fantastic film, it had me on the edge of my seat for 80+ minutes, fantastic performances all round, now I know why he won the up and coming star award at this years BAFTAS. Defo one to recommend 5# performance 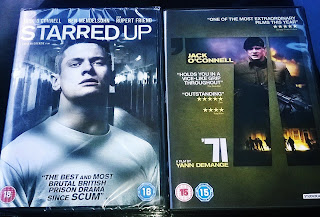